Red Foxes Paintings Through The Years

I’m working on a new red fox painting .It’s from one of my favorite locations in Martic township, southern Lancaster county, Pa . I’ve used the location before. I love it’s character!  It’s clothed in an ethereal  moss and wrapped in rock and it reaches out and weaves over a clear run of babbling water and it reminds me why I live where I do. So, Join me and lets see where this goes and if I can do justice to its essence.

End of Week One. AT THE DEN (1990) This painting won the 1991 Pa State Conservation Print Competition. We had a friend who dropped off a recently dead fox that had been hit on the road.We stored that fox in our freezer for months. I’d take it out and allow it to thaw enough to move it into the pose I wanted. This would work for a short time and back into the freezer Mr.Fox would go. It always amazes me, as an artist, how far we go for authenticity. 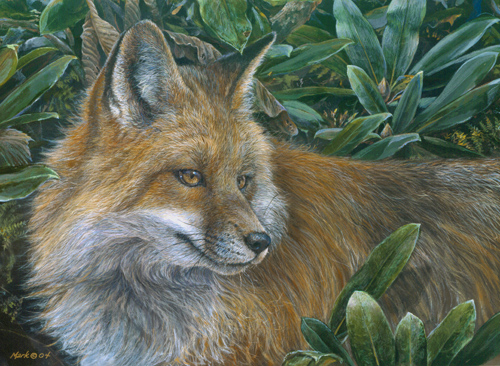